On August 13, 2019, East Hickman High School was honored to receive Governor Bill Lee,  House Representative Curcio, and other state officials for a tour of the Career-Technical department.

Governor Lee interacted with the students of EHHS and explained how, when he was in school, classes such as Culinary, Mechatronics, and Agricultural Science were not a large part of the curriculum. He confidently stated that they were making a comeback and receiving more focus.

Governor Lee and Representative Curcio showed interest in the small delights Mrs. Boehms’ culinary class prepared for them and spent a few minutes of their visit enjoying the snacks and chatting with the culinary students. They continued to move from classroom to classroom talking and listening to students and teachers.

Toward the end of the visit, Channel 2 News initiated a short interview asking what was the biggest problem rural counties like Hickman county face. The plight of rural counties was one of the first executive decisions made by Governor Lee after his inauguration. His GIVE (Governor’s Investment in Vocational Education) program seeks to bring additional opportunities to rural communities by allowing more interaction and collaboration between the private sector, communities, and local schools. 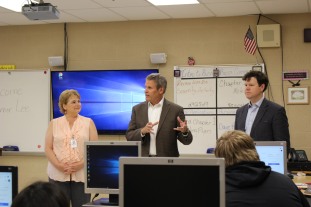