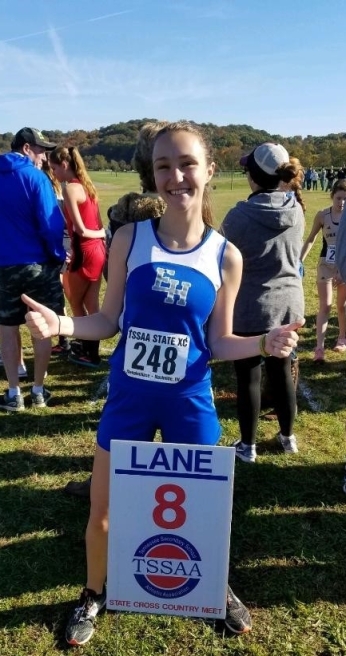 EHHS’ very own cross country team has built up and created many accomplishments. Recently, senior Olivia Plunkett, on the other hand, brought about record breaking history for the school’s fall sport.

Plunkett’s spot on the cross country team has lasted for four years as she as been active for all of her high school career. Cross country coach, Greg Matney, comments on her running journey: “Olivia has been working hard and has pretty much rewritten the record book for running here at EHHS.”

The senior has made it to regional competitions a multitude of times while going further to state competition once previously.

After completing this year’s Autumn season, she again moved on to compete in regionals. Plunkett’s several achievements beforehand aided in the push to reach the set of competitions.

The runner explains how she had felt confident about this year’s regional race because of the copious amounts of practice and the addition of agreeable weather. “Last year I only got 4th place. I had felt sick and stressed beyond compare. Plus, the bad weather didn’t help,” she continues, “…but after everything, I felt so ready to run this race; I was so relaxed, the weather was nice.  Everything fell into line.”

With her high spirits into place, Plunkett finished up the race with a time of 22.16.48, beating the school’s records (just two tenths off her personal record).

Mr. Matney continues revealing, “Catie Latham’s 5K record was the only one left that she [Plunkett] had not broken and for the last year she’s really been trying to break it.” The record brought him a huge amount of joy “…because she had worked so hard to achieve her goal, I was thrilled to see her accomplish it.”

Plunkett’s regional school record then led her to compete in the state competition once more. Both she and Coach Matney stated that the record winning run at regionals, which pushed her to state for a second time, made the record seem even more special.

Plunkett proceeded to participate in the state competition with a run time of 22.27.16.