East Hickman High School welcomes Chris Austin as the new football coach for next year. He played football for four years and basketball for three years in high school. During college, he was part of the football team at UT Martin. Currently, he is coaching at Hickman County High in Centerville.

Coach Austin accepted the position at EHHS because he feels that it would be a great opportunity for him and his future students and players. “I like being involved in kids’ lives,” says the future coach. He will be teaching history at EHHS as well.

As a coach, he hopes to change the atmosphere surrounding and culture of his football players; however, he hopes to accomplish a little more as well. With sincerity, the future coach encouragingly states that he wants to be a part of all the good things in the future for EHHS,“not changing the atmosphere in the football team, [but] in the school.” He loves competitions and watching his team succeed. He greeted parents, students, and faculty at the Community Night hosted by EHHS school on March 7, 2019.

East Hickman High School held its annual friendly lip sync battle between the classes and departments. Freshman Thora Deloach dethroned last year’s champion, Mr. Scott Angell, who is one of the high school’s Spanish teachers. Thora and her group composed two choreographed dances—one to the song “Riptide“ by Vance Joy and one music piece from the kids movie “Trolls.” 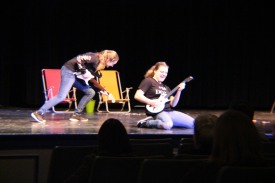 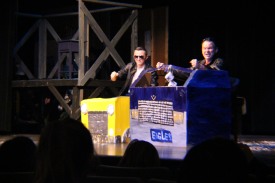